Can a company famed for making reliable and good amps design speakers? That will be the question on everyone’s mind when they approach the Bryston Model T speakers.

To set the record straight, Bryston is not the first amplifier manufacturer to venture into making speakers. Krell tried that many years ago and some say that was what maimed the company before a venture capital firm bought it up and forced out the founder.

But Bryston is in another league simply because all the products it launched in the past few years had been winners – from the flagship 28B SST monoblocks to the headphone amp/preamp.

The Model T speakers have continued Bryston’s winning streak. It seems some people ordered them before they were even officially launched.

Before I went to the AV Designs showroom to listen to them, I was already warned that they look ugly, but sound surprisingly good. One well known hi-fi guru commented that they sounded “sweet”.

The first few tracks were old pop recordings and I thought they sounded decent with rounded-off leading edges. Then he played songs that were better recorded and the leading edges sounded snappy and swift. Cymbals and violins sounded clean, perhaps a tad too clean. But there was no metallic distortion given that the twin tweeters use metal domes. And the bass packed quite a wallop and is rated to go down to 25Hz.

When he played classical music, I thought the speakers sounded very dynamic with the contrast between soloists and the whole orchestra highlighted impressively.

Then he saved Dire Straits” Money For Nothing for the last and turned the volume up high. The speakers could play real loud – they were at dance-club loudness level and yet there was no distortion. Everything still sounded clean – very loud, but clean.

The signature version of the Model T has an external passive crossover in the form of a box. This costs RM3,900 more, but it offers the upgrade path of converting the speakers into active ones with the purchase of an active crossover and some amplifiers – Bryston, naturally. Actually, they can be paired with any amp, but since the speakers are made by Bryston…

Were they ugly? Actually, they didn”t look that bad. They were big, a bit bulky but I think the larger ATCs look uglier.

At RM24,000 a pair (for the non-signature version with internal crossovers), they give a fantastic bang for the buck. I have heard better speakers, but they cost much more than that. If you’re looking around for speakers in the RM20k to RM30k range, you have to listen to the Bryston Model T. 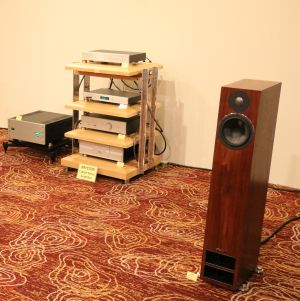