Paul Stephenson is Managing Director at Naim Audio, one of UK’s leading hi-fi brands. Paul celebrated his 30th Anniversary with the company some time ago, and I was invited to have a chat with him, about the company, and hifi in general. I wasted no time and shot him some questions.

PS: Yes, I’ve been doing business in Malaysia for 30 years and this is my first time here indeed. I like this country very much, but it”s just a little too hot for me!

WL: Tell us a little bit more about your career with Naim Audio, which I understand spans more than 30 years?

PS: I joined Naim in those very early days, where we had only 6 staff, working in the company. I’ve seen the company grow over the years till present day, and we are now part of an Anglo/French hifi group of companies(Naim Audio is now part of a larger company, namely Focal, the French speaker company).

WL: What was it like, working with the late Julian Vereker(Naim Audio’s founder)

PS: In hind sight today, Julian would appear to be an eccentric individual. However, it was really fun working with him those days, and he is one of the most laid back guys who’d kick back and chill out. He was a pretty generous chap too. It was an honour to have worked along side Julian.

WL: I know I probably shouldn’t ask, but how do you find working with the French?

PS: Well, we are still in the early stages of our relationship, some call it the honey moon period, where we are still lovey dovey and still looking forward to meet each other. I know that from a historical perspective, the British and the French don’t aways get along, but when the going gets tough, we can still work together for the greater good of a common goal. The truth is, hifi is entering a period of exiting times, with computer audio becoming dominant in the form of the music streamer. There exist plenty of opportunity to leap frog in terms of technology, but to do so requires plenty of R&D funding. So there exist a synergy where we can pool our R&D resources, to develop new products for the various market opportunity. However, both Naim and Focal will remain brands with distinct identities, to cater to different marker segments.

WL: That mean ruling out Naim speakers manufactured in France?

PS: The situation remains fluid on a number of things, but you’ll never find a Focal speaker re-badged as Naim”s. Take our latest speaker series called the Ovator, with BMR driver based technology which are unique to Naim, while Focal have their Beryllium tweeters(which are really sweet by the way!). When we embarked on a new speaker series to replace the old SBL series, we didn’t just wanna do another box, with Scanspeak drivers in it, as that would’ve been easy, which is why, nearly every other speaker brands have done so! Therefore, we looked around and found that BMR driver technology was still in it’s early stages of development, but showed plenty of potential, because the BMR drivers can theoretically handle nearly the full range of the musical spectrum, without the need to have x-overs at the points where human hearing is most sensitive to phase and impedance shift. The result is very much the musical coherence of a single driver design, but without its technical draw backs, like rolled off highs and lows, high sensitivity but poor linearity, well….you get the picture. So have you heard the Ovator speakers?

WL: I actually kinda like the Ovator speakers. I feel they break away from Naim’s previous speaker designs completely, and are much more in tune with today’s audiophile aspirations, like they should be placed in to the room, rather than requiring wall re-enforcement. There’s more of a 3D sound stage element with the Ovator speakers, compared to the rather flat, wall of sound type of sound stage projected by the SBLs. Having said that, I am sure some would say Naim had sold out to the market demands. Do you agree with my take?

PS: Yes, I totally agree that the Ovator speakers are very much designed for the modern times, to partner with our new electronics. I would however disagree that we have changed direction with our new products. We still hold dearly to our beliefs when it comes to power supplies, which are crucial to audio performance and therefore, we make them up grade able, along with a lot of other things, like our signature internal cable routing, which is still very much done the same way since the early days, because they are critical to the audio circuit’s noise rejection capabilities. Our products are sold on the premise of a modular system solution, that if a customer buys a whole Naim system, he should be able to achieve a level of sonic results that we know is possible. If a customer buys a partial Naim system, then he has opened himself a whole factor of uncertainty, though I agree that the smart and experienced audiophile can probably get better sound through the mix and match route. Either way, the choice is up to the buyers.

WL: Some have said that the old Olive Naims sounds best, your opinion?

PS: The old Naims certainly set the standards then, and are still probably very good sounding by today’s standards. However, audio circuitry and advanced as do component technology. Today’s Naim products sound as such as the result of using the latest evolved circuits and new components. Even if we wanted to do so, we just can’t buy anymore the very same components available to us 20 years ago. So as time moves on, technology marches onwards, just like in the days of the LP, then CD, and now music streamers. Our products merely evolved with the times.

WL: So which one do you listen to most at home, the LP, CD or music streamers?

PS: I have all three sources at my home. Let’s start with a Linn Sondek LP12 with a Naim Aro arm and the Armageddon power supply, which I only use when I am in the mood for the best sound quality attainable. Then I have a Naim CD555 which sounds great, but it’s no longer competitive against the music streamers, which I use probably 80% of the time. Having said that, I think I’ll keep the CD555, only because it’s an engineering tour de force and certainly, a very nice bit of kit!

WL: Talking about the Aro tone arms and Armageddon power supplies, do you sell more of them now, due to the up trend in vinyl revival?

PS: We sold a total of six Aro arms last year, if that’s any indication of vinyl revival. However, we also understand, that vinyl will be very niche product in today’s streamer dominated market place. We’ll keep making Aro and Armageddon power supplies for the Linn Sondek LP12 as long as there’s still demand for them.

WL: Any new projects or products in the pipeline that you can disclose today to Naim fans?

PS: No, there are none that I can talk about today, but there will always be  projects that are under evaluation and products under scrutiny. It”s what we do, and how we make things better engineered, and most importantly, sound better in the process.

That was all the time I had with Paul, who was due to board a home bound flight the very next morning. We said our good byes and I wish to thank John Yew of CMY Audio & Visual, the Malaysian distributor for Naim Audio who made this enjoyable session possible. 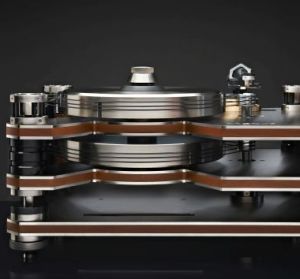 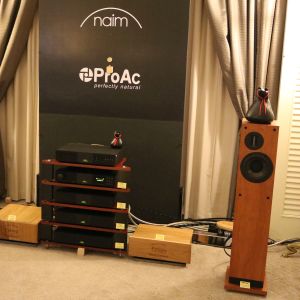