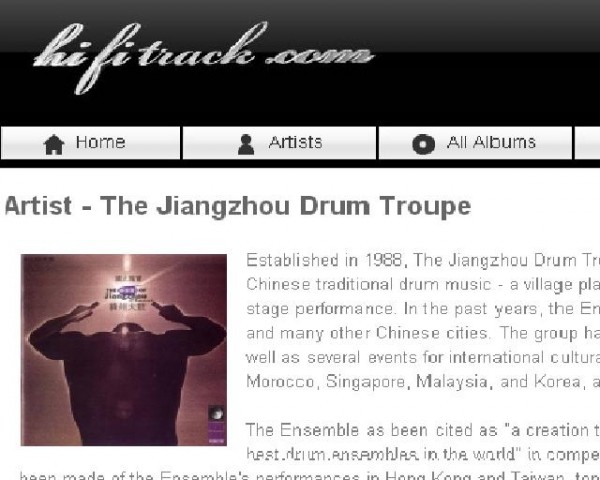 After the recent visit to Pete Teo’s studio when a pair of PMC twotwo.6 professional monitors were delivered to him and the long chat we had on recording quality and how his Hong Kong-based sifu Leo Fung had rescued a traditional drums troupe in China from going extinct by recording them in performance and sending the proceeds from the sale of the CD back to the villagers, I decided that it was time for me to Look East.

Back in my house, I googled and found out that Leo Fung’s seminal recording was called The Drums of Jiangzhou and it was available for download at www.hifitrack.com (http://www.hifitrack.com/en/node/1881). There are 11 tracks and each song costs HK$20 (RM8.35).

The Jiangzhou Drum Troupe is from Shanxi and its music dates from the Qin Dynasty (221-207BC). The drummers are farmers and their music is folk music that has been passed down the generations which Leo Fung has elevated with his superb recording into an elegant art form highly praised by music lovers worldwide.

“Called Jiangzhou in ancient times, Xinjiang County is located in southwest Shanxi Province. Jiangzhou is a time-honored ancient city and holds an important historical place in politics, culture and economy. According to Jiangzhou records, Jiangzhou drum music originated during the Qin Dynasty (221-207BC), and became popular in the Ming (1368-1644) and Qing (1644-1911) dynasties.

“The Huaqiao drum is one of the most representative in Jiangzhou drum music. One ensemble consists of different kinds of drums and at present there are more than ten preserved drumming skills that include beating the edge of the drum, ‘lashing’ the surface of the drum and ‘knocking’ drum rings.

After downloading the tracks – which are only 16-bit 44.1kHz quality – I proceeded to play them first with a Lenovo laptop with J River V 19 via Kimber silver USB cable to a Wyred 4 Sound DAC2 and later with a Bryston BDA-2 and BDP-2 with the files stored in a thumb drive.

For the past week or so, I have been listening to lots of hi-res music with resolutions from 24/88.2 to 24/192 from various companies such as HDTracks, 2L, HDTT, Reference Recordings, etc, but Leo Fung’s ‘lo-res’ 16/44.1 files stand out in terms of sheer sonic quality.

The imaging is immaculate and the depth is astounding. Dynamics and micro-dynamics are impressive and clarity is excellent.

Indeed Pete Teo was correct – the quality of the recording matters very much. And Leo Fung’s recording of the Jiangzhou drums is deservedly an audiophile classic. It took me so long to discover it simply because my perspective of audiophilia is too Western-centric. hi adrian4454, yes, 'Rolling Walnuts' is a great track. another great track for testing your system is 'Calling on Soldiers by Emperor of Qin'. it took me too many years to get to hear this classic, but it's better late than never. tq sflam

yes, ‘Rolling Walnuts’ is a great track. another great track for testing your system is ‘Calling on Soldiers by Emperor of Qin’.

it took me too many years to get to hear this classic, but it’s better late than never.

Hi Lam,
You make me reminiscing my teenage years! Thanks for the write up. I still recall vividly my friend used to own this CD back in somewhere between 1993 to 1995. It was quite a famous Audiophile Test CD, same era like the Rebecca Pidgeon’s The Raven, DaDawa’s Sister Drum.

If not mistaken, the CD booklet synopsized the whole recording chronology. If memory still serve me well, it did talk about pulling a lengthy Hitachi power cable because the village very isolated, the nearest electric source was very far away.
They did stop for a break during recording and ate watermelon, not knowingly their juicy hand touches the microphone, which later attracted flies the buzz around it, causing “natural distortion”.

I remember “Rolling wallnuts” was a very wonderful track when you got to read what they trying to mimic using various sizes of drums.