When I was doing research for the previous post on vertical vs horizontal bi-amping, I came across two articles by two hi-fi luminaries in support of vertical bi-amping.

One of them is none other than Steve McCormack whose DNA-1 stereo power amp I used to own some years back. The other is Dennis J. Had, President of Cary Audio. Dennis’ article is understandably a massive promotion of Cary Audio’s amps, but what is more important is the rationale he gives for vertical bi-amping.

It is important to note that both of them emphasise that the two stereo amps must be the same while Steve insists that the speaker cables and interconnects must also be the same.

I must add that the power cords must also be the same. Based on my tests for the previous post, even a change of one power cord could alter the sonic signature of the entire system.

Passive vertical bi-amplification is defined as using one amp per speaker, while horizontal bi-amping uses one amp for the highs of both speakers, and another amp handles the lows. The “passive” part refers to using the speaker’s own internal crossover network to do the range splitting and signal conditioning, rather than an external electronic crossover.

Passive vertical bi-amplification is easy to do (and works well in my opinion) so long as you use a matching pair of stereo amps, along with matching interconnects and speaker cables (4 separate lengths required). The trap that many audiophiles succumb to is to start mixing-and-matching different cables with the thought that some are better for highs and others are better for lows. This may seem like a good idea, but it usually just messes-up the system coherence. This is actually the reason why some high-end speaker designers refuse to provide bi-wireable inputs – it gives the user the opportunity to screw things up.

In my opinion, passive horizontal bi-amping will never work as well as the vertical option. Ok, why? Let’s assume you are using a matching pair of stereo amps. In the vertical approach, both channels of each amplifier see the same input waveform, and the only difference in the output is the amount of current vs. frequency. There is no difference crosstalk across the common power supply and ground system, and that’s a good thing.

In the horizontal approach, each amplifier sees a different left channel / right channel input (just as it would in a normal full-range setup) so you do have the usual crosstalk and signal interference across the power supply which degrades performance to some degree (unless you have a perfect amplifier – good luck!).

Ahh, but you have the solution! Just use 2 different amps – one chosen for the highs, and another that has great bass. That should do the trick! Well, sorry – we’re right back to that whole “loss of coherence” problem, and we’ve complicated the issue by adding the need for separate level controls to match the amp’s volume. This simply doesn’t work well (or very rarely) with speakers whose crossover point is usually somewhere in or close to the midrange. This is not to say that it can’t be done, but having it turn-out well and actually conferring an advantage is difficult and unlikely in the extreme. But this has not stopped a lot of folks from trying. Hey – it’s a hobby after all, and monkeying around with this stuff can be a lot of fun and a worthwhile learning experience. You’ve been warned 😉

Why Four Channels are Better Than Two, for Stereo

Today I am writing as a very excited boy. As I write this I am experiencing audio heaven right here on earth in my home listening room. I would like to explain this and bring you up to speed on why four amp channels are better than two for two-channel stereo. I am speaking of vertical bi-amping using the exciting new Cary Audio Rocket 88. The Cary Audio V-12 stereo power amplifier is another excellent candidate for use in vertical bi-amping.

There are numerous advantages in a bi-amplified stereo system. One simple explanation of the bi-amping advantage is that it can provide additional headroom per watt of amplifier power. I use the term simple in a reserved fashion. Because simple is not always simple with the ‘why and where for’ of a scientific term.

First, let’s look at how one goes about bi-amping a home stereo system and then come to a comprehensive understanding of why the system sounds so much better. It is better this way than when using more powerful monobloc single channel power amplifiers.

Bi-amping in a home audio system, using two identical stereo amplifiers along with bi-wire capable loudspeakers, offers a more than subtle improvement in the musical presentation. The high frequency portion of the program is routed to the separate high frequency crossover and drivers in the loudspeaker. The bass frequencies are routed to the low frequency loudspeaker crossover and driver (or drivers) in the loudspeaker system. The result is an effective increase in the headroom that is greater than would be obtained by simply using a single amplifier of twice the power. In other words, a 40-watt per channel stereo amplifier will out perform, in a bi-amp configuration, an 80-watt mono amplifier driving all the drivers together.

Please note I have specifically mentioned that this is bi-amping for the home. This is not professional sound reinforcement where electronic crossovers are used in front of the amplifiers and the power amplifiers drive the PA loudspeakers direct with no crossovers or compensation networks inside the speakers systems.

We who have experienced bad “PA sound” all know how dreadful this can sound. On a few occasions I have had the opportunity to listen to a home audio system using electronic crossovers in front of the amps and in turn the amps directly feeding drivers. My ears are still ringing; it was simply dreadful to say the least. The form of bi-amping I speak of uses the built in passive crossovers incorporated in a quality home loudspeaker. With the built in crossover the speaker designer, generally, has spent untold hours designing for the specific speaker in question. To remove the internal speaker crossover and attempt to electronically compensate for all the individual driver variables is next to impossible.

Acknowledging the above, I would like to explain what occurs when one separates the bass and midrange tweeter with separate amplifiers. Loudspeaker specifications are given for a particular speaker with both high and low frequency crossover networks and drivers hooked together at the same time. When these crossovers and drivers are separated, some truly marvelous changes occur with regard to impedance. Generally the midrange tweeter section will exhibit higher impedance. This higher impedance load is much easier for a tube amplifier to drive.

Most solid state amplifiers sound superior driving a higher impedance. The woofer (or multiple woofers) will exhibit lower impedance as they go below their respective self-resonance (Fs) frequency. The resonant frequency will be considered the lowest usable frequency of the woofer in the system for this discussion. As the bass notes go deeper below Fs, the woofer will tend to drop lower in impedance. These dips can call upon the amplifier to deliver more current in the lower registers. If the driving amplifier needs only to produce current in these registers it will have more control and usable power since the high frequencies going through the amplifier are looking into a very high impedance, many times on the order of 20 to 30 ohms. The amplifier will simply throw out voltage in these out of band frequencies without the need to deliver current and in turn power.

The same occurrence takes place with the midrange tweeter crossover system. As low frequencies enter a tweeter midrange crossover network, the amplifier looks into a very high impedance that will not pull down the amplifier. In simplistic terms, the amplifier channel that is feeding the midrange tweeter network will only be delivering any appreciable current when the frequencies are in the mid to high frequency range.To take this wonderful concept a bit further one need only look to the advantages of a Cary Audio Design Rocket 88 or V12 amplifiers. These two stereo amplifiers come equipped as standard with two very important features for bi-amping. The first is the independent ‘switchable on the fly’ impedance matching selector for each channel.

The other very important feature is the ability to switch independent channels to either triode or ultra-linear operation mode. Given the facts as presented, most loudspeakers may tend to go low in impedance in the bass and at the same time need less energy and power in the upper registers. This offers the user the ability to customize their system.

To illustrate a couple of vertically bi-amplified home systems, I would like to share two examples used in my home:

System number one has a pair of B&W 801 Nautilus loudspeakers. This loudspeaker is a three-way design with a 15″ woofer, a midrange driver and a tweeter. The crossover has bi-wirable separate inputs for the woofer and one for the tweeter midrange section. I have a pair of the new Cary Audio Design Rocket 88 stereo amplifiers driven by the Cary SLP-2002 preamplifier. One of the Rocket 88’s is for the left channel and the other is for the right channel. This is called a vertical bi-amp system.

In this usage, one stereo amp is used for each channel with one channel driving the 15″ woofer and the other stereo channel driving the midrange tweeter. Two separate sets of speaker cables are used for each loudspeaker. The inputs of the Rocket 88 amplifiers are joined together with combining interconnects that Cary Audio now offers. In this case they are balanced to balanced “Y” connectors. I am running the channel that feeds the woofers in the ultra-linear 40 watt per channel mode with the speaker impedance switch set at 4 ohms. On the same Rocket 88 amplifier the midrange tweeter channel is run in the 20-watt triode mode at 8-ohm output. The end result is astonishing. The sound stage width and depth increased appreciably and even when played at extremely loud levels the presentation stays focused and life size. The sonic improvement over a single stereo amplifier is not subtle.

System number two consists of a pair of Magnapan 1.6QR Planar loudspeakers. This system uses two V12 stereo amplifiers. I have one channel of a stereo V12 amplifier running in the ultra-linear 4-ohm position for the main bass & midrange panel and the other channel operating in ultra-linear 8-ohm position for the tweeter panel. This gives me great balance with more air in the high frequencies, along with great control in the bass & mid-midrange. Again, I’ve gotten fabulous results, even better than a single pair of V-12 mono blocs!

To sum up this dissertation, the following is offered in simple terms:
One stereo amplifier per channel, equals 4 channels of amplification
Each stereo amp is dedicated to one channel … vertical bi-amping
The two inputs of each stereo amp are wired in parallel
Outputs are wired separately to woofer and midrange tweeter inputs on the loudspeaker
ONE LAST AND VERY IMPORTANT NOTE, Please make sure ALL the power amplifiers are genuine Cary Audio Design along with Cary Audio Design preamplifiers.

Thank you so very much for your continued interest and support of Cary Audio Design.

Yours Truly,
Dennis J. Had
President 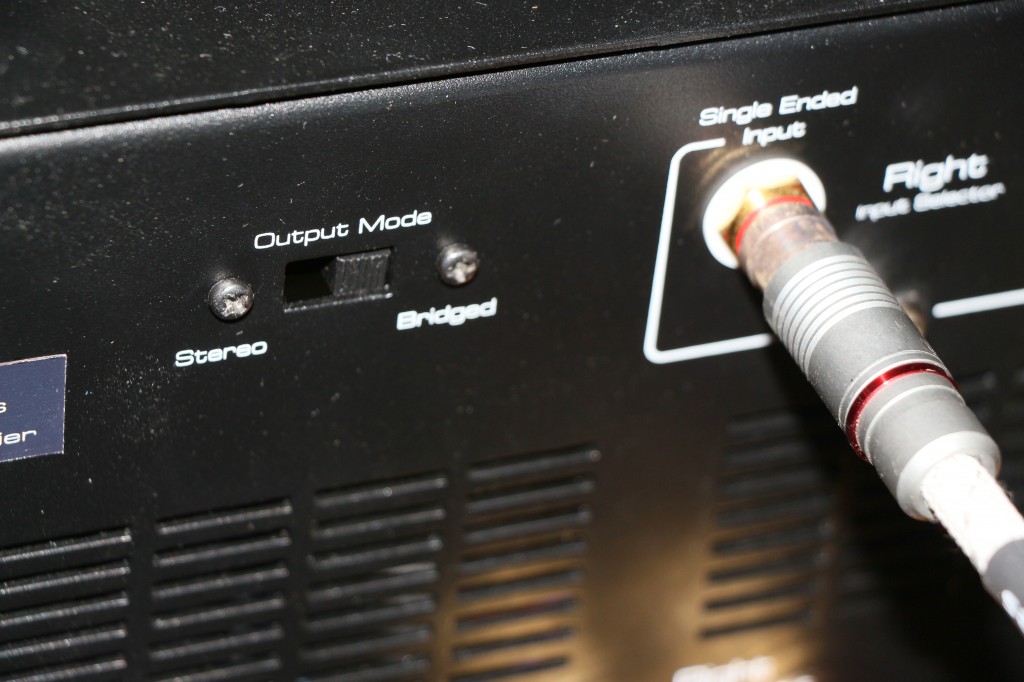 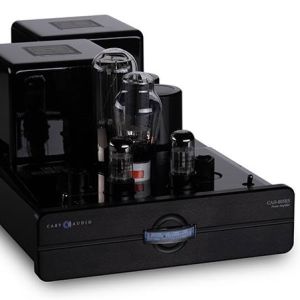