Over the past few years, I had been hearing lots of good things about Skogrand cables and when James Chin of YL Audio offered me a Skogrand Wagner power cord to review, I quickly jumped at the chance to do it.

The Wagner power cord is nicely made and is quite flexible despite it being rated at 32 amps. Through the translucent outer jacket, you can see the brocade sleeve and you will notice the gentle twist of the conductors. The US and IEC connectors have shiny metal bodies, but there is no indication of what brand they are.

According to the Skogrand website, the Wagner power cord is a multistrand design with ample shielding and 15A 125V/16A 250V UP-OCC Connectors. It has 2 x 4mm2 stranded UP-OCC copper conductors, 1 5mm2 ground wire, 2 x braided copper shielding, Polyolefin cable jacket and insulation,  optional silk brocade cable sleeve or black braid with purple polyolefin shining through. The connectors are made from Rhodium plated UP copper.

I started off with it plugged to my preamp, the Lamm LL2 Deluxe replacing the resident KLEI gPOWER3 power cord. The other end of it was plugged to the resident MIT Z-Strip power conditioner.

I streamed music from a laptop using the Chord Hugo as DAC via an Oehlbach USB cable and I started off listening to a CD-rip which I had not heard for a long time – Dire Straits’ Brothers In Arms. When playing the track Ride Across The River, there is one part which has the sound of the chirping of crickets (at least that’s what I think it sounds like) and I noticed that the chirping seemed a bit subdued. I quickly replaced the Skogrand Wagner with the KLEI gPOWER3, played the same track and waited for that part of the song. Sure enough, the chirping of the crickets sounded sharper and clearer.

That made me aware of the characteristic sonic quality of the Skogrand Wagner – the treble region was a bit rolled off. After more listening using other CD rips like Nils Lofgren’s Big Tears Fall and Believe which feature lots of piano, it could be discerned that the high notes lacked a bit of shimmer and sparkle.

However, the slight treble roll-off was compensated by a midrange that was dense and textured which made vocals, especially female singers, sound magical. That is the strong point of the Skogrand Wagner power cord – it has the capability to create magical vocals and a lush midrange, much like what an SET tube amplifier can do very well.

Another strong point is its bass which is deeper and fuller than with the KLEI. However, in terms of soundstage, the Skogrand sounded shallower, but it did not lose out to the KLEI in terms of width and height.

The next thing I did was to use the Skogrand with the Bryston 4B SST power amp replacing my DIY cable with Furutech US and IEC connectors. Again, I noticed the same traits that I noted when I used the Skogrand with the preamp, but this time the depth of the soundstage was not as shallow. The treble roll-off and dense midrange were still discernible. The bass was also fuller. I felt that this was the best way (at least in my sound system)  to use the Skogrand Wagner power cord with it plugged to the power amp and the KLEI connected to the preamp.

One thing I have noticed about power cords is that they react differently with different components and even different sound systems. If you own the Skogrand Wagner power cord, try it with your preamp, power amp, CD player and even the DAC to find out which component it sounds best with.

The Skogrand is not cheap – it costs US$2,500. You can pay James Chin the equivalent amount in ringgit. Since it is a relatively large investment for a couple of feet of wire, try it out with various components before buying.

Skogrand cables are distributed in Malaysia by YL Audio. Call James Chin at 012-3712699 for more details. 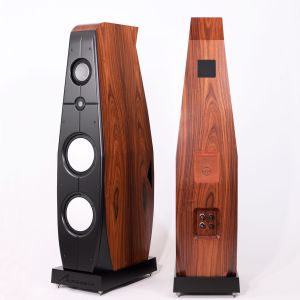