Using ‘King of Wood’ to tweak your hi-fi system

This morning when I logged into Facebook and saw a post by Sky Eugene which featured a piece of wood with a ball of unknown material placed on top of his KEF LS50 Wireless speakers, I was immediately piqued by the tweak. He said the wood was ‘Kayu Raja’ (sometimes called ‘Raja Kayu’ which is Malay for ‘King of Wood’).

Hi-fi enthusiasts are well known for using all sorts of things from cork sheets to quartz obelisks to chopping blocks to actual acoustic music instruments like violins to tweak in order to get the sound that they like. Using wood to tweak is quite common and varieties like ebony (used by Shun Mook), mahogany and myrtle (used by Cardas) are available commercially. But using Raja Kayu to tweak is not so common. Sky Eugene is only the second hi-fi enthusiast I have encountered who uses the special wood for tweaking sound quality.

The Raja Kayu deserves a more detailed description as it is at once exotic and mystical. It is exotic because it is found deep in tropical jungles and is quite rare. It is mystical because according to Malay folk beliefs, the wood has some supernatural power to ward off evil spirits and shamans (‘bomoh’ in Malay) use the wood to make amulets to protect the wearer. It is also medicinal and I have seen the Orang Asli (the aborigines of Malaysia) use small pieces of the wood to rub their knees to strengthen them since they have to hike for miles in hilly jungles to look for fruits and hunt for food. If you rub the sawdust of this wood on your skin, it will be absorbed into the skin. I have seen this happen and I have no explanation for it. Indeed I have used the Raja Kayu sawdust to rub with several drops of cold-pressed castor oil into my knee which hurts from osteoarthritis (a by-product of ageing…sigh).

The first time I saw the King of Wood being used to tweak sound quality was when I walked into the demo room of YL Audio and saw small logs of this wood measuring 5″ to 6″ long and about 3″ in diameter placed standing up in several parts of the room. James Chin, the owner of YL Audio, told me it makes the music sound ‘faster’. He also introduced me to another variety of the wood called Raja Kayu Putih (White King of Wood), which as the name suggests is whitish in colour compared with the deep reddish-brown colour of the normal King of Wood. The white version is also lighter than the normal version. James used a combination of the King of Wood and White King of Wood to tune his demo room.

When I saw Sky Eugene’s tweak, my curiosity was immediately piqued. I asked him what the improvements were and he replied that the Raja Kayu improves the mid and brings it forward while the sphere of yellow crystal enhances the energy of the sound, extends the bass and increases the highs.

Sky Eugene said he bought the wood from a street vendor in Ipoh and the tweak was a DIY job. 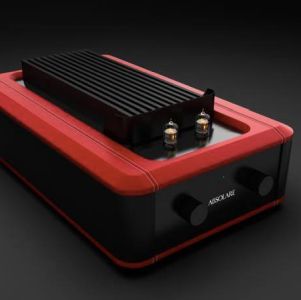